With corn in various stages of dent and starch fill, you may be wondering how to schedule for last irrigation.  For those of you

in our Nebraska Ag Water Management Network using watermark sensors, the goal is to use them to determine when the soil profile reaches 60% depletion (for silty-clay soils in our area aim for an average of 160 kpa of all your sensors).  You may be thinking, “An average of 90kpa was hard enough!” but as Daryl Andersen from the Little Blue Natural Resources District points out, you’re only taking an additional 0.30 inches out of each foot.  So if you’re averaging 90kpa on your three sensors, you have depleted 2.34 inches in the top three feet so you still have 0.96 inches left (see the Soil Moisture Depletion Chart).  If you add the fourth foot (using a similar number from the third foot), it would bring the water available to the plant up to 1.28”.

At beginning dent corn you need 24 days or 5 inches of water to finish the crop to maturity.  If you subtract 1.28 from 5 you will need 3.72” to finish out the crop.  Corn at ½ milk line needs 13 days or 2.25” to finish the crop to maturity-so subtracting it from 1.28 would be only 0.97”.  Taking into account the good potential for rainfall and what moisture is in the profile, you should be done irrigating corn.  Soybeans at the beginning of seed enlargement (R5) need 6.5”.  Most soybean fields that I’ve looked at are in R6 or full seed which needs 3.5 inches yet for maturity.  Subtracting off the 1.28” in the four foot profile would lead to 2.22”.  If we don’t get a few more rains then beans may need one more round.  The UNL NebGuide Predicting the Last Irrigation of the Season provides good information on how determine your last irrigation in addition to showing charts on how much water the crop still needs at various growth stages.

Daryl Andersen explains how to use this information in a simplified way.  One way to look at this is by the numbers of days left.  At 1/4 starch, there are about 19 days before maturity so you can let your sensors average 130kpa on the first week and 150kpa on the next week.  If these targets are met during the week, you would put on about 1 inch of water.  By going to these numbers, it might give you a higher probability for rain in the next couple of weeks.  ET rates this summer have been running less than 0.25” per day for the most part, so with the humidity we’ve had, the crops have not been using much water, which has really helped our dryland corn again in areas where we aren’t receiving rain events.

Lab near Clay Center on August 16th!  I would encourage you to register and to go!  If you’ve been to the field days before, changes have been made so that all the demo plots are now research plots-so all the trials will be harvested, data collected, and shared in future meetings and field days.  The theme this year is “Growing Nebraska’s Future” and the event will focus on staying competitive in a global marketplace, increasing profits and meeting the world’s growing food and energy needs starting in Nebraska.

Topics include: nutrient management and high yield alternatives; pest management and yield enhancement products; weed management; and marketing and risk management. In addition, UNL Extension’s BIT Mobile will be on hand for participants to visit and learn how to optimize irrigation efficiency and energy use with the SoyWater program. If you have unknown crop problems, please bring along your samples for agronomists and plant disease and insect specialists to look at for no charge.

The field days are sponsored by the Nebraska Soybean Board in partnership with UNL Extension in the University’s Institute of Agriculture and Natural Resources and are funded through checkoff dollars. The efforts of the checkoff are directed by the United Soybean Board promoting effective, efficient, farmer-driven programs.  The field days begin with 9 a.m. registration and conclude at 2:30 p.m. Free registration is available the day of the event; it would be helpful to RSVP for meal count to 800-529-8030 or you can let me know by replying to this blog or emailing me at jrees2@unl.edu.  More information can be found at http://ardc.unl.edu/soydays.   I hope to post the pod cast of this event shortly, but am still working on how to do this!

Well, it was great to take a week off and the weather sure was nice in Colorado!  It seems like it was a poor week to miss in regards to 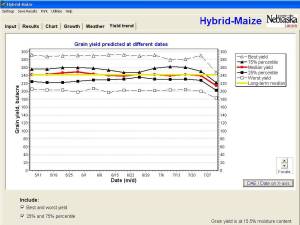 crop happenings, though.  Several of you have been asking for a month now for me to run the Hybrid-Maize model for 2011 corn yield predictions and I just haven’t taken the time to relearn how to input the current weather file and run the simulations-but I did tonight.

In my May 1 post, I was showing impact of planting date on yield- 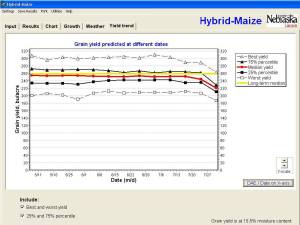 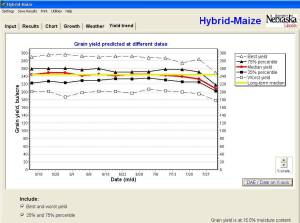 bu/acre respectively with frost risks of 3%, 10%, and 17% respectively.  Granted this is just a model and can’t predict perfectly what will happen.

Again, I’ll repeat it’s just a model and is looking at “a perfect year with no limiting conditions”.  I already knew we wouldn’t be looking at record yields.  The corn had looked even and good for the most part once it got taller, but it hid the

many problems including stand problems from rain washing, residue, Pythium, greensnap, etc.   Looking at the actual weather data (from Clay Center, NE station), night time temperatures were really high and may have led to the sharp predicted drop off in yields.  I remember well the one hot, dry, non-humid week in August 2010.  The model showed a sharp yield reduction then and the corn essentially shut down after that.  I hope it doesn’t shut down after last week.  The other caveat is that I used “generic” hybrids, did not input specific GDD’s or silking dates, and a planting population of 32,000 plants/acre.  Changing any or all of these factors can influence what the model predicts for yield.

Prior to last week, the average yield for 2011 based on Clay Center

bummed about this year’s crop-again, this is just a model!  I’m just sharing as several have asked me to and it did such a good job of predicting in-season yields last year.  It’s also predicting maturity really early-within the first two weeks of September this year which can affect grain fill and ultimately yield as well.