We often say water is the lifeblood of agriculture.  In a drought year like this, that truly is the case!  A case study showing the impacts of irrigated 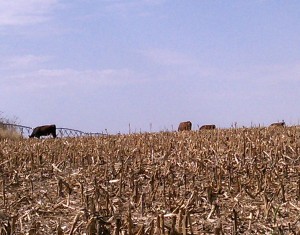 agriculture to Nebraska this year can be found here.

Interesting is the dichotomy we’re experiencing in south central Nebraska where irrigated fields that were truly fully irrigated may have some of the best yields producers have experienced while in so many areas of the State-even neighbors a few miles away-are experiencing the worst year they have ever faced.

Dryland yields have been all over the board mostly depending on tillage type.  Irrigated yields that were truly fully irrigated have been outstanding.  Hybrid Maize predictions for our area had been good all year for fully irrigated corn and it looks like they are even better than the long-term average predictions!

Yet, as I drive around the countryside I can’t help but wonder at how many corn stalks are already being disked under.  At a time when we’ve had several fires in our own State of Nebraska…when we have farmers and ranchers suffering trying to find forage for their livestock.  We are so blessed to have irrigation here and that buffers our producers from weather extremes.  But let’s not forget about the others who are hurting right now!  I would ask our producers with irrigated fields to please consider leasing your stalks for grazing or baling them this year to help those in need of forage.

Research from UNL shows that cattle and cornstalks go well together.

Some producers worry about compaction but in a dry year like this, compaction is essentially a non-issue-at least this fall.  UNL research from 1996-2011 showed the effects of fall and spring-grazing on subsequent corn and soybean yields.  On average,  yield of the following soybean crop was increased by about 2 bu/ac with fall-winter grazing, and 1.3 bu/ac with spring grazing, compared with no grazing of corn stalks.  Yield of corn as the second crop after grazing was not significantly affected resulting in an average of 1-3 bu/ac yield increase depending on fall or spring grazing. Check out this study and all our resources to help with drought decisions.

An upcoming Webinar called Cornstalk Grazing-Understanding the Values to Cattle Producers and Corn Farmers scheduled for  Oct. 2 from 12:30 to 1:10 p.m. will provide additional information.  If you are unable to view it, it will be recorded with all our Beef Webinars.

So while irrigation has provided life and good yields to many producers’ crops in the area, let’s not forget about our neighbors who are less fortunate.  Please consider leasing your corn stalks or baling them to help others in need of forage for their livestock!  You can connect with other producers by checking out the Hay and Forage Hotline at 800-422-6692.  This hotline lists hay and forage including cornstalks that is available via sale or donation.

Additional Resource:  How much to charge for cornstalk grazing?

In spite of green stems and even leaves on some plants, soybeans are surprisingly drier than what you may think.  I’ve been hearing reports of

soybeans in the 7-10% moisture range already in spite of there also being some “lima beans” along with the low moisture beans at harvest.

Harvesting soybeans at 13% moisture is a combination of skill and maybe some luck.  Why is 13% so critical?  A standard bushel of soybeans weighs 60 lbs. and is 13% moisture.  Often beans are delivered to the buyer at lower moisture than 13%.  The difference between actual and desired moisture content will result in lost revenue to the grain producer.  Here’s how the loss works based on UNL Extension’s “10 Easy Ways to boost profits up to $20/acre”:

Rapid dry-down and difficulty harvesting green stems and pods are the most common reasons for harvesting at lower than standard moisture. The following practices can help producers maintain quality and expected moisture content.

The past week walking along the sidewalk to my office in the courthouse, I noticed the lawn browning and just thought “it must be late summer 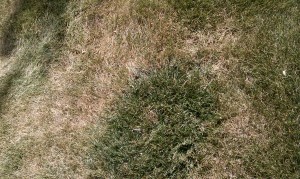 patch or brown patch”.  One day the custodian came into my office saying, “You’ve got to see this!”.

So we went outside and sure enough, we could roll the turf back like a carpet and there were up to 10 grubs in a small patch the size of a dinner plate in several areas of the lawn!  We definitely had a grub problem but no fear as it can be resolved.

If you are seeing brown patches in your turf right now, see if you can roll the turf back like a carpet.  If it comes easily with no attached roots, it very well may be a grub problem.  See if you can view any grubs present; you may have to dig in the soil a little.

What you can do:

Grubs can be controlled this time of year with Trichlorfon (Dylox)  and carbaryl (Sevin).  Please read and follow label directions.  Watering the products in will increase efficacy and help grass roots begin to re-establish. 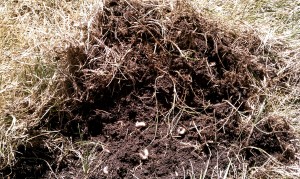 If you had a large patch affected and you’re concerned about it coming back, you can always power-rake to remove the dead material and overseed to re-establish grass in that area.

For more information on different types of grubs, please see the following Blog post by my colleague Elizabeth Killinger.

September 11, 2001.  A day that many of us won’t forget what we were doing when we heard of the first plane crashing into the World Trade Center.  I reminisce about what I was doing at that moment in this post from last year.

This past year, there wasn’t a day that my husband walked out of his living quarters over in Afghanistan where he didn’t think about 9/11/01.  The qulat where it was believed the 9/11 attacks were planned stood on his FOB (Forward Operating Base) just outside of where he slept.  Every day he said he looked at it and it reminded him why he was in Afghanistan…why he originally decided to join the Army National

During the deployment, I received several questions from people.  One of them which occurred more than I care to admit was, “What are we even doing in Afghanistan?”.  To which I responded, “Have you forgotten about 9/11?”.  Sometimes deep down I would be upset…upset that we can so quickly forget the attack on our nation and the lives lost that day while the members of our military bravely put their lives on the line daily for us and our freedom.

Sometimes in the business of life I would just stop and look around…people rushing around going about life as if no war was even occurring.  I wonder if that bothers those who return from war or if they view this as they’ve done their job so that we can continue on with our lives?  Those of us at home with loved ones away never forget; we may still be busy but we never forget.  Yet I tried to channel that upset feeling to one of thankfulness…Thankful to all who have and are serving to continue to keep this great Nation free.  Thankful that we don’t have to experience what it’s like to have bombs going off daily on our home soil; I think often of the children in Afghanistan and Iraq.  Thankful that we can go about a daily life without having to sacrifice much of anything.  I think that’s what we’ve lost in this war.  The ability to know what it’s like to sacrifice in order to contribute to the greater good like the Great Generation did during World War II.  Ultimately I’m thankful to live in this Nation created under God, thankful for our freedom, and thankful for those who continue to protect this freedom!  May God bless America and may we never forget 9/11/01!

2012 Corn Yield Potential Forecast Based on Aug. 27 Hybrid-Maize Simulation:  Irrigated corn yield potential is predicted to be 2-8% below long-term average, while dryland yield potential in much of the Corn Belt will be moderately to severely reduced, falling 22-67% below normal. Predictions are assuming no stress during pollination and fully irrigated fields with no equipment, disease, or insect problems.

Simulations were run for dryland corn in Iowa, Illinois, and South Dakota, and for both irrigated and dryland corn in Nebraska. Simulations were based on the typical planting date, hybrid relative maturity, plant population, and soil properties at each location. Underpinning data used in these simulations are provided in Table 1. To evaluate the impact on potential production at 12 sites across the Corn Belt (Figure 1), we used the Hybrid-Maize model  to estimate end-of-season yield potential based on actual weather up to August 27, and historical long-term weather data to complete the season using data from each of the past 30 years. This approach gives a “real-time,” in-season estimate of expected yield potential (the median value shown in Table 1) depending on weather conditions from August 27 until the corn crop reaches maturity.

August 27 projections give a narrower range than our projections based on August 13 simulations, and, at some locations the crop reached blacklayer during the past week (Mead, Concord, O’Neill, and Nashua, Iowa). Projected yield potential since August 13 has not changed by more than 7% across all locations, except for the two locations in west central Illinois (Monmouth) and south central Illinois (Bondville) where predicted dryland yield has increased by 30% due to good rains and cooler weather. It should be noted, however, that if unusually hot, dry weather occurred during pollination at these Illinois locations, such a large yield improvement would not be expected due to reduced seed set. Still, projections of final yield potential are below the long-term average at all sites, under both irrigated and dryland conditions (Table 1).

The bottom line is that 2012 irrigated yields will be moderately lower than the long-term averages (2-8% below normal), while dryland corn yield potential in much of the Corn Belt will be moderately to severely reduced (22-67% below normal). It is important to keep in mind that yields can be even lower at places where both prolonged drought and high temperature stress at pollination have occurred. Also, greater field-scale variability is being observed this year in irrigated fields due to the inability of some irrigation systems to keep up with crop water use demand, problems with pivot irrigation nozzles and uneven watering, and additional stresses from insects and diseases. Such problems can contribute to reduced yields at irrigated sites of more than the 2-8% simulated by the model.There is a modest yield loss (5-8%) for locations in South Dakota (Brookings) and west central and north central Illinois (Monmouth and DeKalb) while a moderate yield loss of 22-28% is predicted for dryland corn in central and northeast Iowa (Gilbert and Nashua). Severe yield loss of 32-67% is projected for dryland corn in south central, eastern, and northeastern Nebraska (Clay Center, Mead, and Concord), northwest Iowa (Sutherland), and south central Illinois (Bondville) (Table 1). In contrast to large loss of yield potential in these dryland systems, the projected losses in yield potential at all irrigated sites are modest at about 2-3% in south central Nebraska (Clay Center, Holdrege), and 7-8% in east and northeast Nebraska (O’Neill, Concord, and Mead) (Table 1). Projected irrigated yield potential since August 13 has increased by about 3% due to cooler weather during the past two weeks.