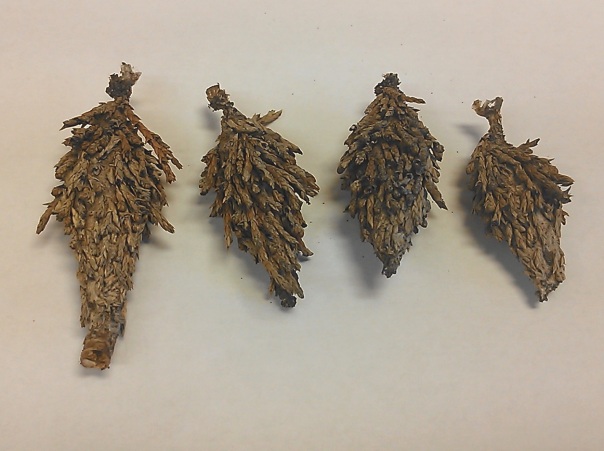 I’ve been receiving questions regarding when to spray for bagworms. Bagworms overwinter as eggs in these up to 2″ bags which are formed throughout the summer with silk and evergreen needles by larvae. Larvae feed until late August or early September. Males then emerge and mate with females through the bag opening in September. 500-1000 eggs are deposited by female moths within their own bags.  After depositing eggs, the females drop to the soil and die.  Bagworms overwinter as eggs within bags fastened to twigs such as these shown in this photo. 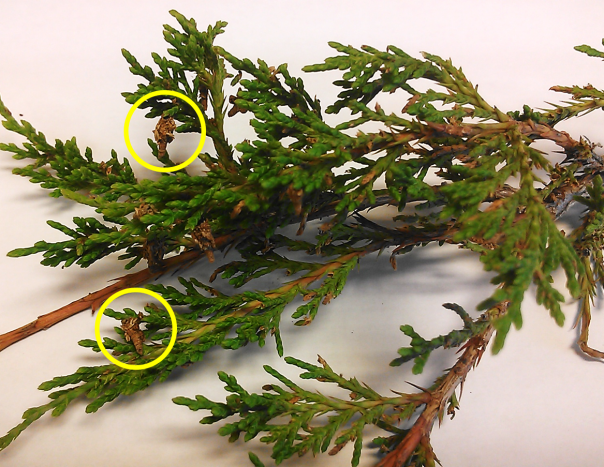 Eggs hatch in mid-May to early June. Some caterpillar larvae remain on the same trees containing the bags from which they hatched.  Others are blown by the wind to area trees allowing for new infestations to occur.  This photo shows new bags (1/8-1/4″) being formed on trees as they create these bags around themselves.  Look closely for these tiny bags on trees right now.  The video below shows how to look for bagworms on evergreen trees right now.  Study your trees and look for small movements on small bags being formed.  If you are seeing this, consider treating your trees for bagworms.  Products containing bifenthrin or permethrin irritate caterpillar larvae causing them to come out of the bags and be exposed to the pesticide.  There are a number of other management options available.  Please see the following publication for more information. 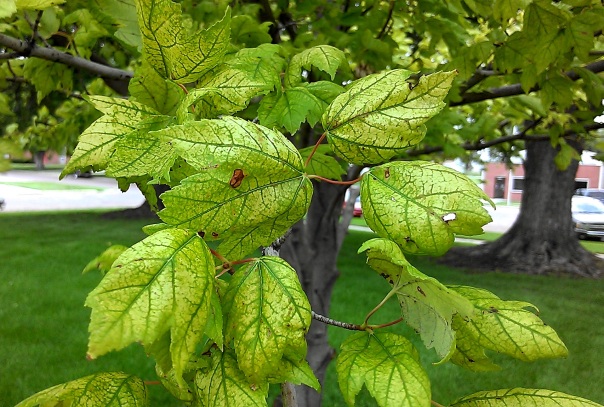 Throughout the County, iron chlorosis is appearing in trees and landscapes. It can especially be seen in the silver maples (shown in this photo) and pin oaks. Iron chlorosis symptoms appear as yellowing of leaves while the leaf veins remain a dark green color. Eventually the leaves become so chlorotic that leaf tissue begins to turn brown/black and die. Severely affected leaves often drop from the tree and new leaves emerge in 7-14 days. Alkaline soils (pH above 7) reduce the availability of iron and manganese; two important nutrients found in tree leaves. It’s not necessarily that these nutrients are deficient in the soil. The high pH just makes these nutrients less soluble and unavailable to the trees. Adding iron to the trees or the landscape around the trees won’t correct the problem as the pH ultimately needs to be corrected.

Early in my Extension career, I inherited the job of injecting trees with a solution of iron sulfate. There would often be a waiting list of people to help, particularly in Sutton, when they’d see the jugs hanging from trees. As a plant pathologist, I was concerned about how much damage we were doing to the trees with repeated injections every five years or so…if secondary pathogens would affect these areas we were drilling in the trees. I was also concerned about providing a free service that took a great deal of time and if we were competing with industry by doing so. Eventually we stopped providing the service but we do rent out the equipment and can provide the recommendations on how much iron sulfate to add based on tree diameter if you are interested. But you may be interested in another less invasive method instead.

I learned of another potential method to consider from John Fech, Extension Educator in Douglass/Sarpy Counties, and we tried it at the Sutton Cemetery for two years and at the Clay County Courthouse last year with decent results. The first step is to double aerate the area from the trunk to the dripline of the trees showing iron chlorosis symptoms. The dripline is the outer leaves of tree. Do so several days after irrigation/rainfall to avoid tearing up the grass in your lawn. Often people aerate their lawn in the spring and/or fall, so if you have a problem with iron chlorosis, you could include the following treatment into your routine. 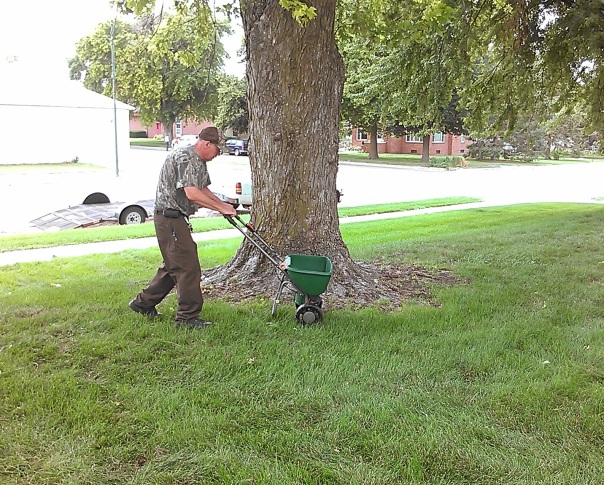 He continued applying around the tree in a circle gradually moving out towards the drip line.  The final step is to then water the lawn. 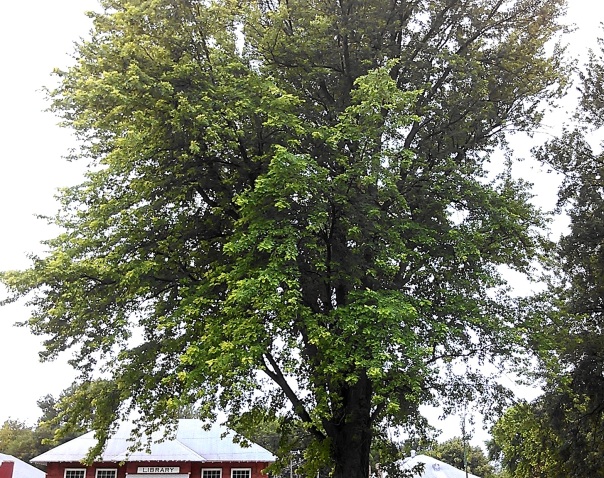 We have numerous silver maples at the courthouse. This is a photo of one of the trees and a close up of these leaves was shown in the first photo. You can see the yellow cast to this tree in this photo and how severely affected many of the leaves were from the first photo. 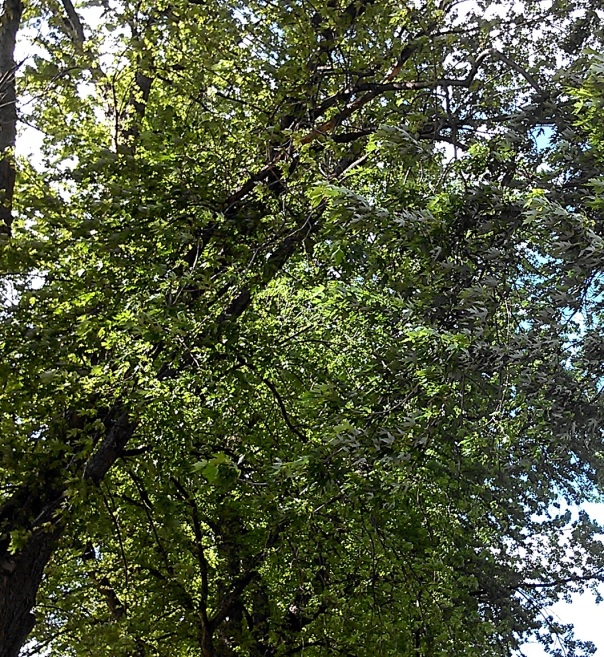 This is the same tree a year later from the opposite side. The photo doesn’t do it justice as it truly is greener than last year and the leaves are hailed damaged. It didn’t really change during the season last year but all the courthouse trees are greener this year. They could use another application though as they still show symptoms of iron chlorosis. This method may take several years before the soil pH changes enough for symptoms to disappear.

You most likely will not see any changes the first year, although the grass under the tree may appear greener.  The goal is to change the soil pH to make the iron more available to the tree in the future.  This may be a process that needs repeated for several years in a row and while it doesn’t show instantaneous results, it will most likely aid in the longevity of your trees by reducing the symptoms without additional harm to the tree through injections.

Corn is approaching or at V7-V8 growth stage.  A few weeks ago, we published research results in our UNL CropWatch website.  That information can be found in the links below the video.  If you are interested in trying this in your field this year, please see the Nebraska On-Farm Research protocals also shown below.

July 1 is the upcoming Weed Science Field Day at UNL’s South Central Agricultural Laboratory near Clay Center.  The brochure with more information is shown below as photos; please click on the photos to enlarge if they are difficult to read.  You may RSVP to Dr. Amit Jhala at (402) 472-1534.  Hope to see you there! 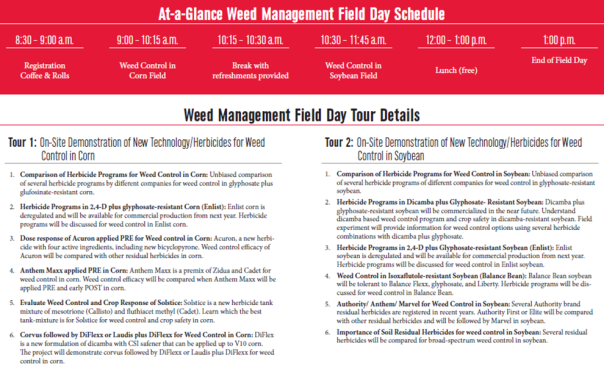 Corn that was hail-damaged on June 3rd is starting to regrow. Leaves wrapped up in the whorl are beginning to slough off as wind and warm temperatures cause the damaged tissue to die and break off. For more information on how stand loss impacts yield, please check http://cropwatch.unl.edu. 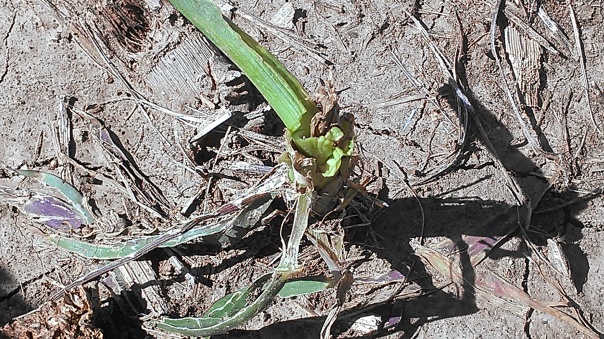 Some corn plants more severely affected were reduced to stems. Sometimes no new growth is appearing while in other plants new growth can be seen. I split open the stem on this plant since no new growth was apparent and the center looked discolored.

In this corn plant, a bacterial rot has set in as can be seen from the discoloration at the upper portion of this plant and the discoloration at crown area. This plant may not survive. This is typical of what we were seeing in Nuckolls/Thayer counties with the 8-10″ of rain they received there.  My concerns for corn at this point are bacterial diseases such as this or Goss’ wilt that may continue to reduce stands through the season.  Some growers are considering a fungicide application but fungicides don’t target bacterial diseases.  We’d recommend anyone considering this to consider an on-farm research experiment and I’d be happy to help set this up for you.

These soybeans were reduced to stems yet are showing new growth 5 days later. UNL research has shown that soybean stands can be greatly reduced without a significant yield effect. Several growers are considering replanting; we’d recommend taking into account the research or conduct an on-farm research experiment to see any differences for yourself like this farmer did.  The other thing we have looked for is bruising on stems and some flooded areas truly did not have plants survive.  For more information, please check out http://cropwatch.unl.edu.

This year I was counting my blessings as we made it through May with no tornadoes in Clay County and no Memorial Day storms!  Yet history seems to repeat itself on days.  Last year, hail went through the counties north of us on June 3.  This year, hail hit us on June 3rd….an estimated 30% of Clay County.  Please also see the resources listed at the end of this post for more specific information regarding decision-making.

Earlier that day, I had looked at wheat in a number of counties where white heads were appearing in wheat. Most often they easily pulled from the head and weren’t more than 2% of fields. Those were attributed to wheat stem maggot. The white heads that were hard to pull from the stem were most likely due to some late frosts that we had in the area.

The evening of June 3rd resulted in various rainfall totals throughout the county and hail damage to an estimated 30% of the County. This photo is of the west fork of the Upper Big Blue River that was flooding many fields along Hwy 6 between Hwy 14 and Sutton. 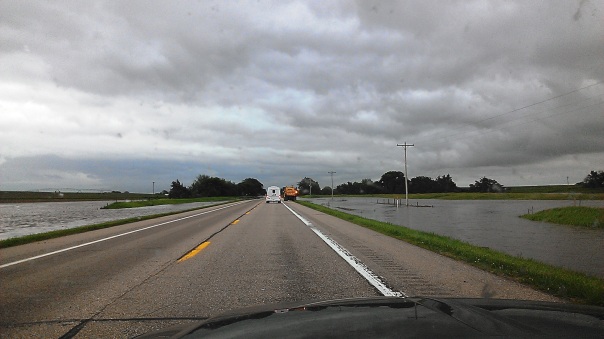 This was June 4: Water along both sides of Hwy 6 from Hwy 14 to Sutton and over the road in a few areas. The road was closed on June 5th after another 3-4 inches fell in the area Thursday night. Portions of fields were flooded throughout the County and we’ll have to see how long it takes for water to recede and what temperatures do to determine any replant situations. 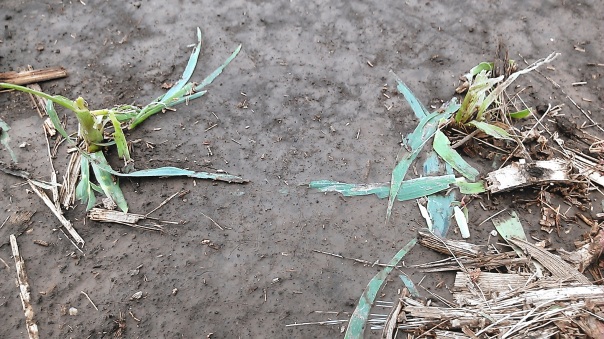 Corn in the V5-V6 stage ranges in hail damage. The worst damage of plants were reduced to sticks. Time will tell how well the plants recover. I’m concerned about bacterial diseases in corn-particularly Goss’ wilt showing up later…but also a bacterial rot that we were seeing in Nuckolls and Thayer Co. after the heavy rains they received last month. 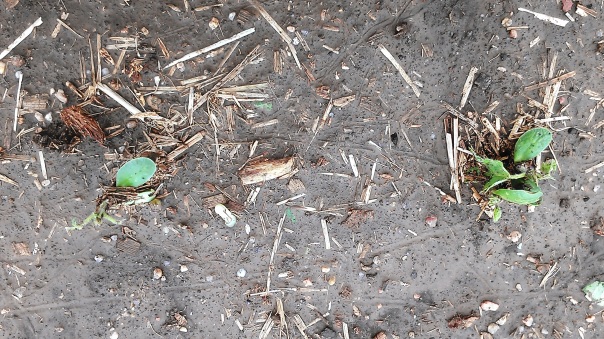 Soybeans ranged from planted to V3 in the County. Many of the hail-damaged beans still had a cotyledon attached. In the past, I’ve seen new plumules shoot from the top of the stem when the growing point wasn’t too damaged. We again will need to wait and see what happens.

First cutting alfalfa is down in much of the County waiting to be baled.

Severely hailed wheat field. You can also see the amount of stripe rust present in this field. We estimated 75-80% of wheat heads in this field were broken over and wouldn’t fill the heads. 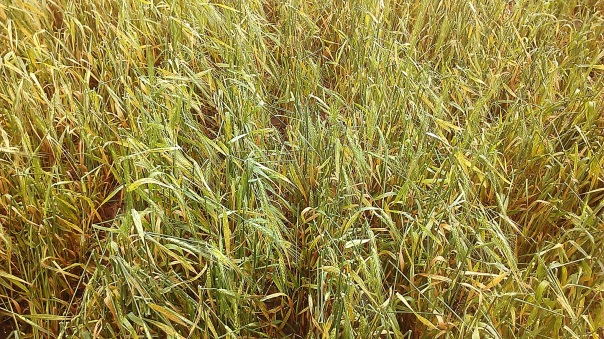 Another hail-damaged wheat photo. We have a great deal of stripe rust of wheat in the County and some farmers with livestock have chosen to hay wheat that is severely affected by stripe rust. Some did spray fungicide which has held the rust back. Others are going to just see what happens yield-wise.

For more information on hail and replant decisions, please see: