Grazing corn residue provides many benefits to both livestock and grain farmers, yet many corn stalks in our area are not grazed for various reasons.  With as much hail as we’ve had this fall, grazing is also an option to remove ears and kernels that were lost, preventing volunteer corn next season.  Normally there is less than a bushel of ear drop per acre, but we most likely have more than that in some of our fields this year.  Two kernels per square foot or one ¾ pound ear in 1/100 of an acre is the equivalent of 1 bu/ac yield loss.  In 30” rows, 1/100 of an acre is 174’ long if you count in one row or 87’ if you count in two rows.

Soil samples (0-8″) for soybean cyst nematode (SCN) can be taken at any time but always good to sample areas that were affected with SDS to determine if SCN is also present.

What may also be of interest to you is a recent finding between corn grain loss pre-and during harvest and sudden death syndrome (SDS) of soybean.  Many asked me this this year, “Why did I see SDS this year when we’ve never had it in this field before?”  It’s a great question and I often responded by saying we need to sample the areas affected with SDS for soybean cyst nematode (SCN) as the two diseases are synergistic.  Sampling for SCN still remains free through your Nebraska Soybean Board Checkoff dollars and you can stop by the Extension Office for free sampling bags.  Crop consultants should contact the UNL Plant and Pest Diagnostic lab directly at (402) 472-2559 if you are requesting 10 or more sampling bags.

Anything that moves soil can transport the fungal soil-borne pathogens causing these diseases.  But recent research from Iowa State University also suggests that the fungal pathogen causing SDS (Fusarium virguliforme) survives on grain lost during the harvest process in fields and that SDS management in soybean actually needs to begin at corn harvest.

Studies were conducted for two years in greenhouse and in field plots with nine treatments to determine the survivability of Fusarium virguliforme (Fv) on corn and soybean residue.  The treatments were:  1-Corn kernels + Fv; 2-Corn roots + Fv; 3-Corn stem/leaves/husk + Fv; 4-No residue + Fv; 5-Soybean seeds + Fv; 6-Soybean stem/leaves/pods + Fv; 7-Soybean roots +Fv; 8-Corn stalk on soil surface + Fv; 9-Corn kernels and stalk on soil surface + Fv.  The researchers consistently found in both the greenhouse and field experiments that Treatment 1 of corn kernels at average harvest loss resulted in the most SDS.  Treatment 2 consistently resulted in the second most SDS. 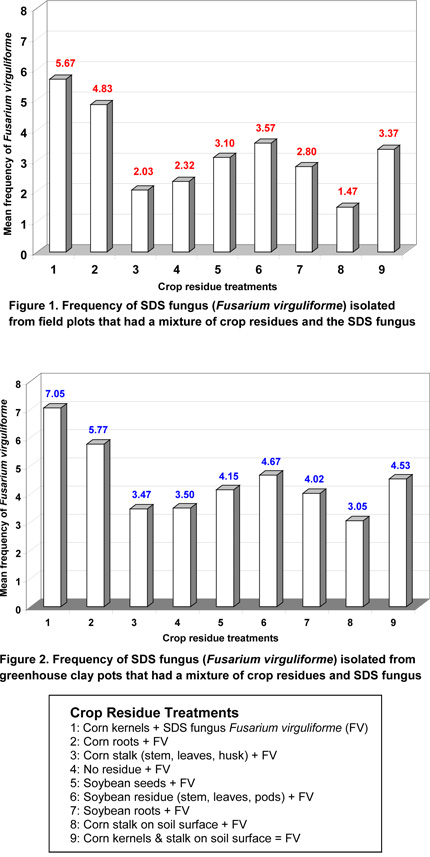 This helps to explain why some farmers are finding SDS in fields that have been continuous corn for a period of years, are finding SDS in corn and soybean rotation when little or no SDS was previously observed, and why SDS has increased in seed corn fields that may have higher harvest losses.  They did not experiment with tillage systems and their recommendation is to reduce harvest losses to reduce the risk of SDS.

Grazing residues can reduce your risk from these harvest losses and for those losses which were incurred with the hail/wind storms we’ve experienced since Labor Day.  When grazing corn residue, cattle are selective.  They will eat the grain first followed by the husk and leaf followed by the cob and stalk.

It’s also important to be aware of grazing restrictions from herbicides applied to row crops; you can read more about that in this post.