Last week was a blur of phone calls but it’s great to receive them and know so many of you are doing your best to wait for your soil to be depleted before scheduling your first irrigation!  There are some of you in the Little Blue NRD who haven’t received the rains the past few weeks and have hit the 90-100 trigger on your watermark sensors to schedule your first irrigation.  Most of you reading this won’t have to irrigate till after tassel (and then you can take into account the 3rd foot in your average)!  The 90-100 trigger relates to 35-40% soil moisture depletion and is proven by research via Dr. Suat Irmak at South Central Ag Lab for our silty clay soils.  Waiting for the trigger, regardless if you’re on load control or not, will still allow you at least a week to 10 days before you have to worry about getting behind.  Please continue to call with questions.  There’s also a discussion topic on my blog for your comments/questions.

Corn and beans are looking good overall, are closing canopies, and corn is rapidly growing.  Wheat is being combined in the southern 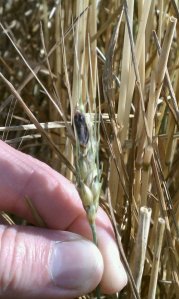 tier of counties and there has been quite a range of yields due to the dry weather producing small heads and disease issues such as scab, smut, and ergot.  Scab (Fusarium Head Blight) is a concern when we receive rain and high humidity during and around flowering.  We were recommending fungicides at that time.  Some people escaped it, some put the fungicide on, and others didn’t-so there’s a range of yields out there from that.  Common bunt (stinking smut) is the smut that creates clouds of black spores when you’re combining and the grain smells like fish.  Loose smut is loose in the head and doesn’t form a kernel shape like common bunt does.  Both can be prevented by not saving contaminated seed and using fungicide seed treatments at planting.

Ergot is one I hadn’t seen in wheat since I’ve been here but have in roadside grasses.  Ergot is caused by a fungus that infects the wheat head during cool, wet conditions during flowering.  Like the fungus that causes scab, it simply replaces the normal pollination process and instead, a black/purple hard fruiting body (sclerotia) is 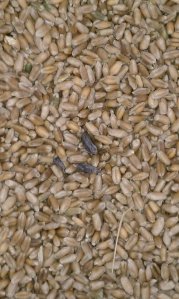 eventually formed.  Before this is formed, a sugary drop called honeydew is formed which then turns into the sclerotia.  It’s a problem for our producers because I don’t know that you can set your fans to blow it out like you can for light, scabby kernels since ergot sclerotia are denser.  The problem with ergot is that it contains toxic alkaloids (one is like LSD)…in fact, it’s blamed that ergot-contaminated grain is what caused the Salem Witch Trials.  These alkaloids are also toxic to livestock so contaminated grain should not be fed or even blended off for livestock.  Federal grain standards classify wheat as ergot infested when it contains more than 0.3% sclerotia.  If you are finding ergot-contaminated grain in your fields, do not save seed back next year; start over with disease free certified seed.  The sclerotia will live on top of the soil for a year (they will produce spores next growing season so don’t plant contaminated wheat fields back into wheat, barley, oats, or triticale).  Mowing roadside ditches and keeping wheat fields free of other grasses can help prevent ergot infested grasses from spreading the ergot fungus to wheat via blowing spores and rain splash.  More information can be found by checking out the UNL Extension publications Head, Grain, and Seed quality on the http://cropwatch.unl.edu/web/wheat/disease Web site.