A few weeks ago I shared some thoughts with you regarding what I learned from an animal welfare conference.  We have an opportunity to hear more in at a much closer location-Sutton Community Center in Sutton-on March 12th at 6:00 p.m.  Dewey Lienemann, UNL Extension Educator will be presenting on “Protecting Nebraska Agriculture” following a meal sponsored by the Sutton Chamber of Commerce Ag Committee as well as area Cattlemen Associations, Breeders & Feeders, and Ag Producer groups.  Anyone interested is invited to attend-and I would encourage anyone who possibly can to attend.  This topic not only affects livestock producers, it affects crop producers, and consumers as well.  It’s very important to understand how various interest groups are attacking animal agriculture and why and how we in rural America can share our stories.  Please pre-register by contacting Tory Duncan at (402) 773-5576 or ccntory@gmail.com or Todd Mau at (402) 773-5224 or todd@toddstrailers.com.

Another opportunity for learning more about family farm transition is with the last Farmers/Ranchers College program this year.  It will be March 15 in Friend at the San Carlos Community Room (next to the Pour House) with meal beginning at 6:00 p.m. (Registration at 5:30 p.m.)  The program entitled “Discussing the Undiscussabull” will be presented by Elaine Froese from Manitoba, Canada.  Froese’s expertise in helping families get unstuck is sought after across the country. She has worked with families in business for over 20 years and is now coaching the next generation. Elaine believes that change is an opportunity, not a threat…she has practical tools to help people discuss the “undiscussabull” to make their dreams come true. In order to save your spot and reserve a meal, registration is needed by calling the Fillmore County Extension office at (402) 759-3712.  The Farmers & Ranchers College is sponsored by area agribusiness, commodity groups in collaboration with the University of Nebraska-Lincoln Extension.

This is a great blog post from Chris Chinn, a farmer in Missouri, who shares why her family raises pigs the way they do to protect them and keep them comfortable. You can read additional blog posts from her at http://chrischinn.wordpress.com

(Disclaimer:  The intent of this blog is to help people outside of agriculture to understand why some farmers choose to raise their animals indoors.  What works on my farm may not work for another farmer, each farm is different, as are the genetics of hogs.  My intent with this post is to help people understand why some farmers use modern technology on their farm.  Our family changed the type of hog we raise to be a leaner hog with less body fat because of consumer demand.  With that change came additional challenges to raising this type of pig in harsh weather conditions.  That is why we chose to move our animals inside of barns because the lean type of hogs we raise can not endure the weather as well as hogs with more body fat. This is not meant to be an indictment of farmers who choose to raise their hogs outdoors.)

Clay Center on February 29th at the Clay County Activities Building at the Clay County Fairgrounds.  The program will run from 10:00 a.m.-2:30 p.m. with registration beginning at 9:30 a.m.  The conference will cover key topics affecting farm management and production decisions for 2012. It is offered by UNL Extension and the UNL Department of Agricultural Economics and is sponsored in part by funding from the Nebraska Soybean Board.

Dan O’Brien of Kansas State University will share his insight on grain and oilseed outlook and risk management decisions in today’s uncertain markets. While market volatility shows the need for sound hedging strategies, concerns about futures market performance and the recent MF Global bankruptcy affecting hedge margin accounts raise questions about the best path ahead for managing market risk. O’Brien will bring his experience and analysis of futures market performance to bear on the issues and discuss implications for producer decisions.

Shane Ellis, livestock marketing specialist at Iowa State University, will discuss the outlook for livestock markets and producer profitability. With outlook for meat demand and continued reductions in cattle supplies, the market fundamentals look strong, but must weigh against grain supplies and feed prices. Ellis will bring his expertise to the situation and provide guidance for producer marketing and production decisions in 2012.

The land market has also been moving in the past year and UNL Extension Educator Allan Vyhnalek will use his local knowledge and analysis to discuss land markets and leasing arrangements with implications for producer decisions.  The closing session will feature a focus on agricultural policy and the direction for new farm programs. Brad Lubben, policy specialist, will discuss the policy outlook in Washington and the major policy developments that could affect agriculture in 2011. Then, Lubben will team with UNL Extension educators to discuss specific directions for the new farm bill and implications for farm programs, conservation programs, and risk management decisions.

There is a $25 registration fee to cover programming expenses for speakers, materials, and the noon meal.  Please RSVP to Jenny Rees at the Clay County Extension Office at (402) 762-3644 or jrees2@unl.edu by Feb. 27 so we can obtain a meal count.  Hope to see you at the excellent conference! 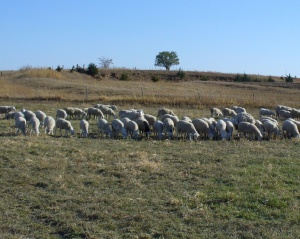 stories to a public increasingly disconnected from where their food comes from.  I learned so much and wanted to share.
Dr. Candace Croney from The Ohio State University shared that animal welfare defined to most of us in production agriculture is stewardship-our animals are entrusted to us, use is acceptable, and we have the obligation to treat those animals humanely.  She defined animal rights as animals have certain characteristics similar to humans (ex. mental capabilities) and thus have rights.  Relationships with pets have become the new paradigm regarding how all animals should be treated.  A key message driven home to me was we need to consider how we say our message.  So often we position animal care as an economic issue instead of an ethical one.  We say things like “We take care of our livestock because if we didn’t, we wouldn’t make any money”…so people focused on animal rights hear from that message the reason we care for animals is for profit…which leads to the next thought that if profit drops, care for the animals is potentially at risk.  We instead need to address ethical issues and find ways to connect with the public meaningfully.  Charlie Arnot from the Center for Food Integrity said it this way, “We need to first communicate ethics, then science, then economics”.
I also have been guilty of saying “we just need to provide more education about what we do”.  But that again isn’t completely correct.  While the science of why we do what we do is important to us, ethics are more important to the general public.  In a survey from the Center for Food Integrity, when asked what factors influence confidence that food comes from humanely treated farm animals, the fact that the producer worked with a veterinarian ranked first in increasing their confidence, but the fact that what the producer did was science based ranked dead last.  Instead of first going to science, begin with showing we’re interested in doing what’s right.  For instance, tell the person thank you for his/her question and that you can tell he/she cares for animals as you do too.  Then go on to explain why you do what you do to care for your animals rather than provide a data dump of scientific facts.  Science can be mixed in, but show the ethics of what you do first.  Go beyond the traditional “food, shelter, water” as that doesn’t resonate; it’s expected as that’s what we also provide to our pets.  Train people who work for you and make sure they truly do care for the animals as you train them.  Determine the message for your operation.  The best part is this is free; with good people it just requires a change in commitment and being consistent with your message.
I also appreciated so much of what Trent Loos, Nebraska Rancher and host of “Loos Tales” radio show said.  “The message we leave out is why we have animals and agriculture”.  The vast majority of the public cares about reasonably priced, safe, healthy food for their families.  Our message should be that “we convert animal resources into human resources such as food, fiber, pharmaceuticals, fuels, and products to improve human lives”.  It’s a matter of changing our terminology and way of thinking.  We shouldn’t say we “slaughter” animals in the U.S….instead “we respectfully harvest plants and animals.”
With the growing disconnect between the general public and where food comes from, we need to be ready to tell our story anytime/anywhere.  I’ve often caught myself saying “it’s been busy” when asked how things have been going.  I’ve been retraining myself to continue for 20-30 seconds explaining what I’ve been doing which usually sparks a conversation about something regarding agriculture.  Part of my reason for this was to help people better understand Extension, but in doing this, I can also help people better understand production ag today.  Whether it’s in the line at the grocery store, at church, at a ball game, or wherever, we all have the opportunity and responsibility to share with those around us our agricultural story because no one else can tell your story for you.  As Trent Loos said in closing, “If it is to be, it’s up to me”.