Fair: As fairs wrapped up in the area, in my opinion, it was a great way to cap off the summer for the youth. So much has been taken away from them and I really appreciate Ag Societies working hard with Extension staff to give the youth an opportunity to showcase their projects! There were several moments throughout fair where I thought “this is why we do this”…to watch youth and adults so excited to see the ribbons on projects, watching siblings and club members supporting each other, families helping other families, and friends catching up. Fair did look different this year. But it forced us to think about things differently with the blessing of some changes may be kept as a result! Thank you to all the Ag Society, 4-H Council members, Extension staff, newspaper staff, and volunteers who gave youth and adults alike the opportunity to showcase projects and safely gather at fairs! Thank you also to health departments for advising on directed health measures and providing PPE and nurses who helped with screenings!

Crop Updates: I didn’t get into the field much this past week but the primary questions I received were regarding tip back on corn, spidermites flaring, and if it was too late to spray fungicides in corn. The answer to the latter is no. If southern rust is showing up pretty good low-mid canopy of your field, it’s something to consider to help with stalk strength as that’s my concern. I’m hearing of some guys having to apply a second round of fungicide due to rust. Hard for me to see guys spending the money to do that thus prefer avoiding automatic tassel applications. While I’m not aware of research to prove it, I think coverage is another issue. Consider asking the aerial applicator to use 3 gallons/acre to increase coverage. I hear some are refusing to do more than 2 gallons/acre and I think that’s part of the problem. Some farmers are also chemigating fungicide and insecticide through the pivot in hopes of improving coverage.

Typically we’d say southern rust occurs on the top side of leaves unless severe, whereas common rust typically occurs on both sides of leaves. On leaves that were flipped over from the wind, I’m seeing southern rust spores (confirmed via microscope) on the undersides of leaves that are now technically facing upward, but not on the ‘normal’ top side of leaf (an interesting observation that a crop consultant asked me about and then I also saw this week to confirm it truly was southern).

Spidermites continue to flare 7-10 days later because most of the products used don’t kill eggs. Sometimes second applications are needed. Insecticides with activity against eggs and immature stages (not adults) include Zeal, Oberon, and Onager whereas the pyrethroid (Bifenthrin products like Brigade in corn and soybeans) and organophosphate products (like Lorsban used in soybean) can help with adults but not eggs. Product has to come in contact with the mites. Thus at least 3 gallons/acre are recommended with aerial applications. Entomologists share aerial applications early in the morning or late in the evening can be more effective to avoid hot rising air away from plants (be careful of inversions). With twospotted spider mite, perhaps all that can be accomplished is to slow the rate of population increase.

Tip back on corn occurs most often from some sort of stress. For this year having good pollination weather, some are surprised regarding how much tip back we’re seeing. It’s important to count kernels long as there may be more kernels than one realizes in spite of tip back occurring. You can tell approximate timing of stress events by the appearance of the kernels. If kernel formation isn’t evident, the stress occurred before or during pollination. If kernels are very small or appeared to have died, the stress was after pollination as the kernels were filling. Water stress is a major stress outside of temperature as to kernels not pollinating and/or aborting. Each ovule (and later, each kernel), competes for water and nutrients. Water and nutrients are necessary for pollen tube formation down silks to fertilize ovules. Water and nutrients are necessary to fill individual kernels with the tips being sacrificed for filling kernels at the base of the ear first.

CARES Act Tax Planning for Farmers: The CARES Act included the Payroll Protection Program (PPP) and Economic Injury Disaster Loans (EIDL), which many farmers utilized. However, several other provisions didn’t get as much attention. For tax planning this fall, check out this helpful info. from Tina Barrett: https://go.unl.edu/re6e.

True topside of leaf that was flipped over with windstorm to be on underside. Can see indentations of lesions but not pustules.

True bottomside of leaf that after being flipped over with windstorm was showing as the top side. Notice the pustules on this side of the leaf. 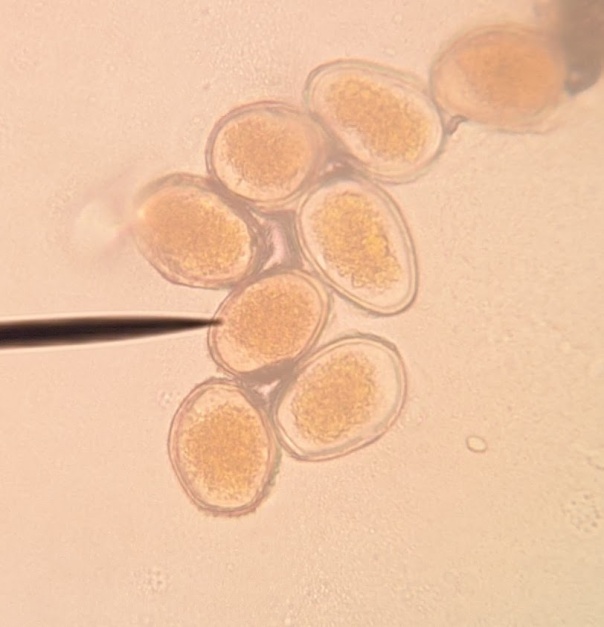 Under the microscope, the spores were truly southern rust (oval-shaped). Common rust pustules are circular in shape.