Crop Update: It is really nice to see crops emerging! The corn, soybean and wheat I 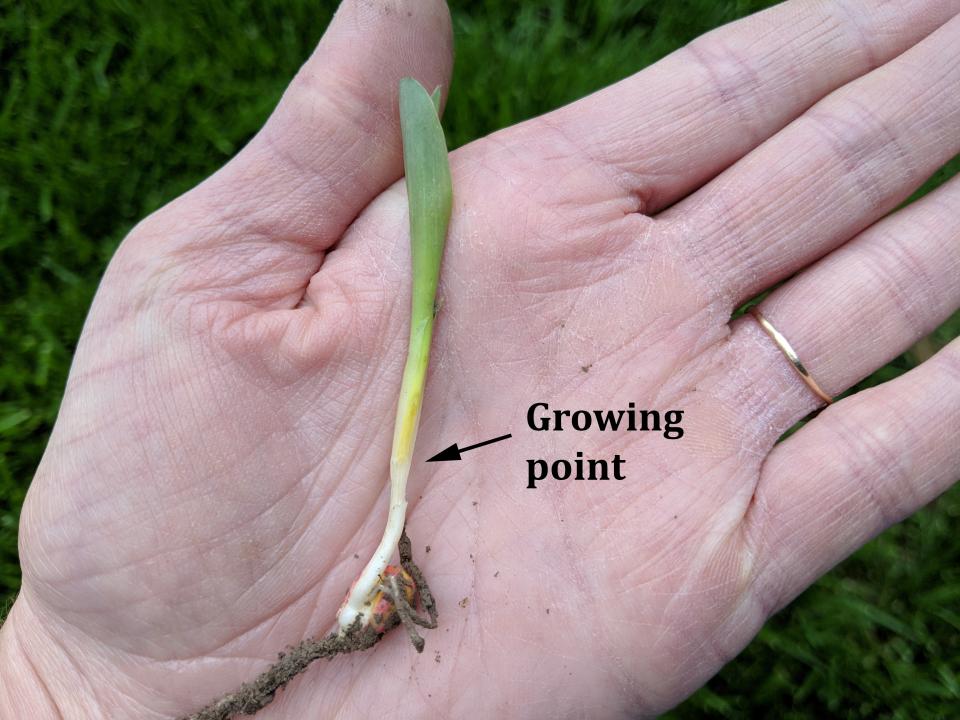 looked at didn’t seem too impacted by the frost. There may be places where crops were more affected. For corn and wheat, it’s important to look at the growing point and make sure it’s white/yellow and firm and not discolored and soft. Impacts to wheat later on can also be seen at heading in white awns. Soybean are more susceptible to frost when those hypocotyls are just emerged at soil level or above and exposed when frost occurs. Soybean with hypocotyls that are pinched and brown will probably not survive. Soybean that have light scarring of hypocotyls and cotyledons most likely will survive. Look for the plumule (first true leaves from the shoot) within 7 days post-frost to ensure the growing point wasn’t injured. (You can see the plumule between the cotyledons in the upper right-hand picture below).

Hopefully we don’t have to deal much with replanting. As we assess stands, this week’s UNL CropWatch at http://cropwatch.unl.edu has an article regarding stand and replant considerations for corn. It’s important to take stand counts in several areas of the field. There’s a table on the CropWatch website which shows original planted stands with planting date and what can be expected for potential yields based on stand counts and replanting at a later date. Roger Elmore shared the following example, “If the original planting date was April 30, a population of 35,000 plants/acre is expected to provide maximum yield. If the population is only 20,000 plants/acre, yield potential is 89% of the maximum for the April 30 planting date. If several 4- to 6-foot gaps occur within the row, yields will be reduced an additional 5% relative to a uniform stand. Stand gaps of 16 to 33 inches will only reduce yield by 2%. Estimate replant yield with Table 2. Use planting date and target plant population to estimate the yield potential of the replanted field. Replanting on May 20 at 35,000 plants/acre will result in approximately 87% of the maximum yield. Compare the replanted crop to the original crop which was planted on April 30 that now has a population of 20,000 plants/acre, and consider the costs of replanting. Expected yields are 89% for retaining the old stand versus 87% for a replant. Remember though, there is no guarantee of getting a good stand with replanting. Insect and disease pressure may be greater in replanted fields.” You may also be interested in checking out a new CropWatch podcast on corn seedling diseases at: https://go.unl.edu/a5zf.

Interseeding Cover Crops: The past four years, some growers have shared with me an interest in interseeding cover crops into corn or soybean. The growers have different goals which may include fall grazing, additional nitrogen from the cover, or soil health impacts such as increasing soil organic matter. Because cover crop establishment after corn and soybean is more difficult and inconsistent year to year, there’s been an increasing interest in interseeding. Basically, the thought is to plant the cover before the corn or soybean crop reaches canopy closure. The cover emerges and then essentially doesn’t grow much during the growing season due to minimal light interception. After harvest, the hope is the cover has greater biomass production since it’s already established. Research in general from other states hasn’t shown yield reduction in corn when the cover was planted after V4…typically from V5-V7. When the cover was interseeded earlier, some states have found yield reductions as the cover basically competes like a weed with the corn for resources. A question we often receive is regarding herbicides.  Wisconsin shares that Sharpen and Resolve for herbicides allowed for greater success with short half-life. They planted radish, oat, pea, rye, red clover in their trials. A family conducting on-farm research in Merrick County has been interseeding the past three years. In their 2018 trial, they used 32 oz glyphosate + 5 oz Status per acre post on 6/1/18 (planting date 5/17/18). They interseeded on 6/26/18 with 6 lb cowpea, 6 lb soybean, 0.5 lb crimson clover, 5 lb sunhemp, 2 lb hairy vetch, 3 lb buckwheat, 0.5 lb chicory, 0.5 lb flax, 0.5 lb rapeseed/canola, 6 lb Elbon cereal rye, 6 lb spring oats per acre. From conversation they were happy with cover emergence after Status application but I failed to ask which species looked the best. They will continue the study for several years.  Outside of this, we have very little research from Nebraska and my hope is to obtain more research via on-farm research this year! We’ve created a 2 treatment and 3 treatment protocol which can be found at: https://go.unl.edu/kvjf. The three treatment protocol can be altered a number of ways: including looking at 2 different mixes compared to a check, looking at different ways of seeding the cover crop vs. check, and looking at different interseeding timings vs. check. Please contact me if you’re interested in trying this!