Southern Rust in Nebraska was confirmed in Nuckolls, Thayer, and Fillmore counties last week. The lesions were typically on one leaf in an isolated portion of fields at low incidence and severity. I was recommending to watch the fields instead of spraying right away. Greatly appreciate everyone who has gotten samples to me this month and to neighboring Extension offices serving as drop off points for samples. I’ve been looking at samples since early July and honestly, common rust at times has exhibited signs similar to southern rust. At my blog site (https://jenreesources.com), I’ve posted photos showing the differences of common vs. southern rust that we’re seeing this year. Southern rust typically is orange to tan colored with tiny, clustered pustules on the upper leaf surface. Common rust has had an orange appearance to it at times with smaller lesions than the ‘typical’ brick red larger ones. However, in every southern rust sample I’ve confirmed, the pustules have not gone through the back of the leaf…there’s been indentations but nothing has produced pustules on the backside. That doesn’t mean that the fungus can’t; it just rarely does. Also, these leaves have all occurred in the mid-canopy. I realize lowest leaves of plants often have a great deal of rust on them, but it’s been common rust in leaf samples I’ve pulled and received to date. I’ve also posted photos of another disease called Physoderma brown spot on my blog. Physoderma is the disease that has purple/brown on the midribs, around leaf axils and sheaths and it also can have tiny yellow-brown spots without pustules that look a lot like southern rust on leaves of plants. It’s one that we tend to see around pollination as the fungus-like pathogen swims in water on the leaf surface and feeds off of decaying pollen.

Confirming southern rust in a few Nebraska counties thus far doesn’t mean that every field has it and we don’t know how it will progress. So our recommendation is to continue scouting and if you have a suspect sample, you can get it to me (if you’re in the area) or to our Plant and Pest Diagnostic Lab in Lincoln. You can keep updated with counties that are confirmed by checking out the Southern Rust tracking site at: https://corn.ipmpipe.org/southerncornrust/. The wide range of planting dates across Nebraska this year has resulted in a wide range of corn growth and reproductive stages in fields, some of which are still in the vegetative growth stages. Keep in mind that late planted fields are at particular risk for southern rust if it increases in development. Right now corn disease pressure in general is low. I’m anticipating that to soon change for gray leaf spot susceptible hybrids. Some growers added a fungicide in with an insecticide treatment for western bean cutworm, which made sense to save an application cost. However, in general, automatic fungicide applications when one treats before disease develops may lead to loss of full product efficacy before critical disease levels. This can also result in the need for reapplication later if the disease worsens after the previous fungicide application and residual has worn off. And, always in my mind is eventual potential for pathogen resistance…so utilizing fungicides when we need them vs. automatically applying is wise for maintaining these fungicide chemistries.

York County Fair: This week is the York County Fair! All events and details can be found at: http://www.yorkcountyfair.com/. One special addition this year is “Brownies for Bergen” on Saturday, August 3 from 5:30-7:00 p.m. The late Gene Bergen was a 4-H icon and was planning on celebrating 50 years as a York County Ag Society Member at this year’s fair before retiring. While he won’t be with us in person, the York County Ag Society, 4-H Council, and Extension Office would like to honor him and his original plans to celebrate. So please join us for brownies and ice cream and share your favorite memories and stories of Gene! 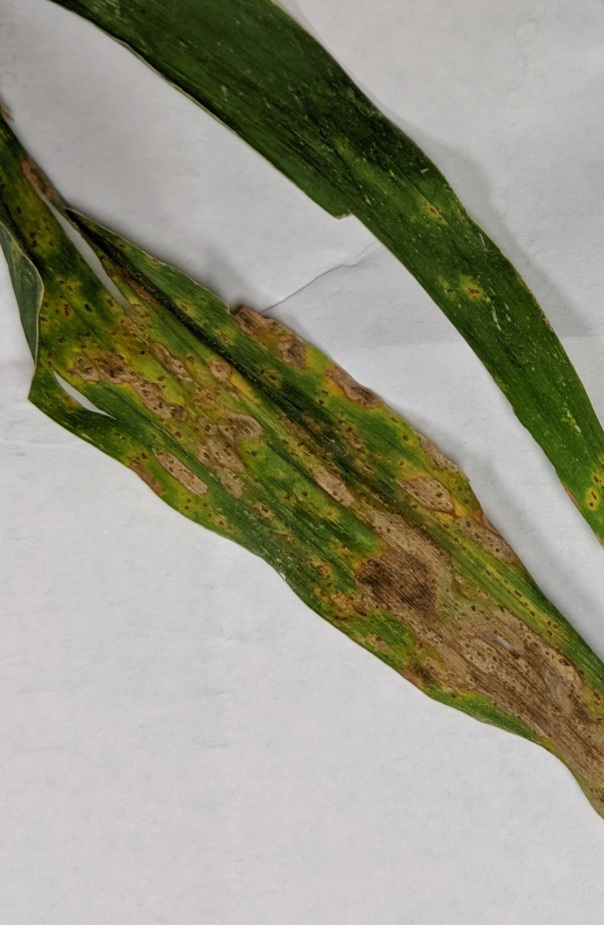 Lower corn leaf that is dying early and has a great deal of rust on it. So far, this has all been common rust as pictured here in spite of smaller, clustered pustules or even orange colored pustules.

Southern rust was confirmed on this leaf in 2019. Small, clustered, tan-orange colored pustules can be seen on this leaf. 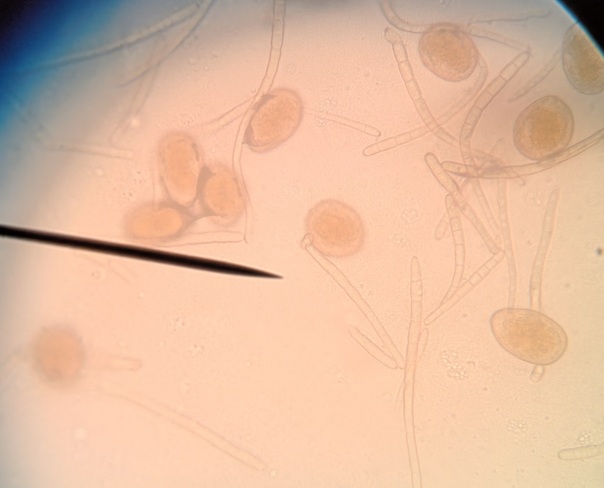 Southern rust spores are brown and oval in shape. Sharing this photo as the clear structures are spores (condia) and spore-holding structures (conidiophores) of Cercospora zeae-maydis which causes gray leaf spot (gls) in corn. Was seeing these spores/structures with only ‘specks’ of gls lesions on this leaf. With humid weather and longer leaf wetness from dews, we may see an increase in appearance of gls lesions in the next 7-10 days. 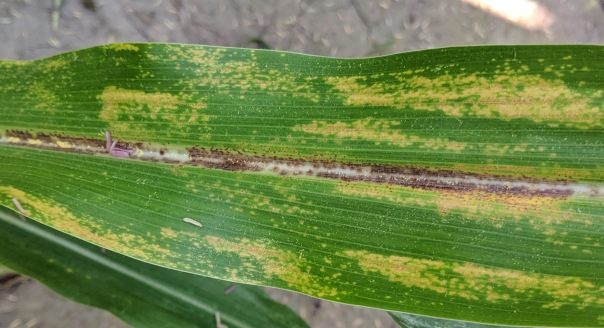 Physoderma brown spot. Symptoms include both the purple/brown midrib in addition to the yellow-brown lesions on the leaf. These lesions are flat in comparison to southern rust which would have raised pustules.