Crop Update: This past week was fairly interesting with southern rust being confirmed in a few Fillmore, Thayer, and Saunders County fields.  We would recommend to continue scouting fields as the disease was low incidence at all these sites. There also were a number of questions regarding fungicide applications.

For those asking about chemigating fungicides, it’s important to ensure the fungicide

On-Farm Research design for those considering chemigation vs. none of fungicide (could also use this for 2 different irrigation amounts instead). Can have more pies than this for smaller area if desired-we would just need at least 4-5 pies of each of same area. Data can be collected throughout field normally during harvest via yield monitor and we can use software to determine yields within the pies as long as we know the angle degrees you used.

product label allows for chemigation and to follow the recommended irrigation amount if specified on the label. If an irrigation amount isn’t specified, Tamra Jackson-Ziems and I were talking about trying to apply with as small amount as possible (perhaps like 0.25″). She has chemigation data at 0.25″ vs. 0.50″ vs. ground application from 2005-2007, but not vs. aerial application. The data had a high degree of variability numerically in the yield data in spite of non-statistical differences. The only other info I could find was the University of Georgia recommends only 0.10″ on chemigation using fungicides, but they didn’t show any data. I encourage those who can to please consider doing this as an on-farm research study where chemigation occurs in pies throughout the field with other pies left untreated. I realize it’s not popular to leave areas untreated, but it may be of interest to you.  For those asking about comparing aerial vs. chemigation for corn, that would be very difficult with one pivot with true research involving replication. Perhaps it could be done if a producer had a couple of quarters side by side, planted the same day with same hybrid and crop rotation where we could truly compare via research. If you do and that’s of interest to you, please contact either Tamra or myself. A couple have also discussed maybe applying half a pivot aerially and the other half via chemigation and just taking observations, which may also be beneficial to you. 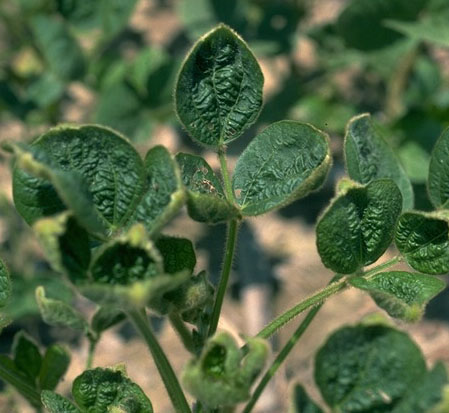 Dicamba on Soybean: Because dicamba negatively affects leaflet margin cell division, direct dicamba exposure to nearly fully developed leaflets results in in a “draw-string” injury symptom at the leaflet tips, thus shortening the leaflet length. Keep in mind, however, that the translocation of dicamba from directly exposed leaflets to very young leaf primordia developing at new nodes at the main stem apex will also induce leaf cupping in those yet to emerge leaflets, even though these very young leaflet primordia were not directly exposed to dicamba. The same can be true for new trifoliolates occurring from additional stem branching at lower nodes. Photo via Purdue University.

injury in soybean. Please check them out at http://cropwatch.unl.edu. I hadn’t heard anyone really explain the difference between 2,4-D and dicamba in how they work in plants so felt that information was important in addition to the fact dicamba is highly translocateable and 2,4-D isn’t. That also has been important in home-owner discussions regarding off-target movement to garden produce. And, a reminder to all home-owners that weed control products used in lawns and empty lots often contain dicamba and/or 2,4-D…so it’s important to read those labels regarding environmental conditions in applying them and also when you can/can’t use grass clippings as mulch.

Buzzing Beetles: This past week, several people came to the office or called 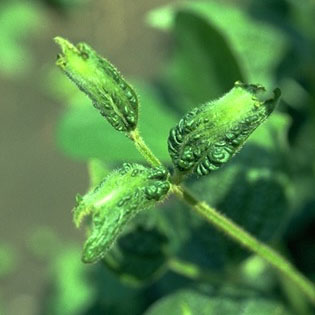 2,4-D on Soybean: 2,4-D impacts cell division in the more central (major vascular) portion of the leaflet. Low-dose 2,4-D exposure induces injury that results in a “narrowed, strap-shaped” leaflet in which the leaflet veins are made more parallel. This 2,4-D-induced injury is often accompanied by a rugose leaf surface ― a botanical term describing a rough leaf surface of irregularly spaced bumps/wrinkles and prominent ridged/corrugated leaf veins. Low-dose 2,4-D exposure will also lessen leaflet area, but differently, by narrowing/elongating the leaflet. 2,4-D is also not highly translocatable, wheras dicamba is. Photo via Purdue University.

regarding large green beetles flying around that sounded like bumble bees. These are called Green June beetles. They only fly during the day. There are also smaller green beetles with white spots (tufts of hair) around the abdomen; those are Japanese beetles. Japanese beetles feed on crops in addition to favorites such as Linden trees and knockout roses.  Both have larval forms that are white grubs and both have a one year life cycle. In the beetle form, both adult beetles are fond of ripe fruit such as grapes, berries, plums, and peaches. As larvae, the grubs feed on decaying organic matter and grass roots in the soil. However, the June beetle larvae can reach 2″ long creating larger tunnels in lawns and pastures as they move in the soil.

Some have said, “I thought June beetles were golden/tan!” And you would be correct! There’s several types of “June” beetles. The most common and perhaps most damaging is known as the June beetle or masked chafer which is golden/tan in color and has a one year life cycle. There’s also a May/June beetle (also known as the 3 year grub) which tends to do more damage in range/pasture ground. Those beetles are tan to brown/near black in color.

When it comes to damage, start looking for browning areas of turf occurring late July, throughout August, and early September. The turf may look like drought stress or fungal disease; however, if you can gently roll the turf back like a carpet, it’s most likely grubs (and you should also find the presence of grubs). Other signs of grubs can include birds, skunks, etc. tearing up your lawn. White grubs in general feed on decaying organic matter, lawn and ornamental roots in the soil. Grubs don’t tend to be an issue in fescue lawns or lawns that are low maintenance or newly established. They tend to prefer Kentucky bluegrass lawns that are highly maintained with fertilizer and irrigation. They also may be spotty in their feeding such as under yard lights or on irrigated slopes. The threshold level for turfgrass damage by masked chafer larvae is 8-10 white grubs per square foot of lawn…so I would assume that to be the case for all grub species. One or two grubs per square foot is normal and does not require control. If grub control is needed, products like Sevin or Dylox provide the best control for mature grubs and should be watered in after application.