hail.  This event of kernel germination prior to harvest is also called “vivipary”.

Typically we wouldn’t see this occur before black layer because of the hormonal balance within the kernels-particularly the balance between gibberellin and abscisic acid.  According to a study by White, et. al (2000), Gibberellin production with the lack of ABA allowed for kernel germination while less Gibberellin and more ABA deterred kernel germination.  At full maturity, very little ABA is left in the kernel (in both corn and soybeans) which allows them to germinate in correct conditions after harvest.  But this can also allow for sprouting in the ear after black layer when corn is still drying down, particularly in tight-husked, upright ears with conditions of high humidity or rain after black layer.  Sprouting under those conditions typically occurs at the base of the ear first.

Why are kernels sprouting before we’ve reached black layer?

That’s a good question.  I haven’t found much in the way of scientific explanation other than the thought that the hormonal balance of the kernels can be altered by physical damage from hail, bird feeding, and grain mold.  Some ear mold fungi also produce gibberellic acid which can lead to a hormonal balance shift in these ears stimulating germination.  I also haven’t observed that this is hybrid-dependent and am finding as much as 25-50% sprouted ears in various areas of hail-damaged fields.

What can you do now?

Make sure your crop insurance adjuster is aware of the situation and make sure to submit samples for kernel damage due to mold, sprouting, and check for mycotoxins prior to harvest.

The local co-op may or may not choose to accept the load depending on percent damage and the standards they need to follow.  If the load is rejected, contact your crop insurance agent to determine your next step.  DO NOT bin the grain on your farm until you contact your insurance agent as they have specific rules that need to be followed in the case of grain rejected due to mycotoxins or kernel damage from storms.

Sprouted kernels lead to higher kernel damage and more fines in a load.  Keys for harvest will include harvesting early, getting corn dried down to 14%, potentially drying at a high temperature to kill the sprout, screening out fines, and monitoring stored grain closely for hot spots, mold, and additional sprouting grain.

You can also choose not to take it to grain right now, and honestly, that may be the best option for several of the hail-damaged fields.  Silage is still an option and it would be recommended to sample the green chop going into the silage pit for potential mycotoxins.  Mycotoxin level does not change with fermentation so cattle feeders would have a good idea of any mycotoxin levels if sampling was done in this manner.  See this post for additional information on making silage. 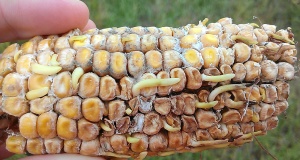 Wiebold, B. (2009). Wet Weather Can Cause Seeds to Sprout before Harvest. Integrated Pest & Crop Management Newsletter, Univ of Missouri.