Corn Quality Concerns: The two main questions I’ve received: “Are you hearing others mentioning low/variable test weights on corn?” and “Are you hearing of loads being rejected (to ethanol plants) due to mycotoxins?” While I’m unsure how widespread this is, I have been receiving these questions. A reminder to check your grain quality if you haven’t already been hauling or checking it.

Test Weight is a volumetric measurement (weight of corn grain per unit of volume), and as such, doesn’t directly correlate with yield. Standard corn test weight is 56 lbs/bu (1 bushel is 1.24 cubic feet). The size, shape, slipperiness of surface, and density of the kernel impacts test weight. Hybrids can show differences in test weight. Test weight is different than kernel weight, and thus not directly correlated with yield. Test weight gets at how tightly packed the starch is within the kernel. Reducing kernel moisture can allow for increased test weight if the starch loses water allowing for it to be packed more tightly within that kernel. Dry kernels that slide past each other may pack better allowing for increased test weight.

Lower test weights can result with disease, insect, and environmental stresses that impact photosynthesis and the movement of nutrients to the kernel during grain fill. These can include foliar and stalk diseases, drought stress, lack of nutrients, freeze prior to physiological maturity, late planting, and below normal temps during grain fill. Rewetting of kernels in the ear can impact test weight as kernels can swell and not shrink back to the same shape as previously. We know that moisture events happened after physiological maturity causing some sprouting of kernels in some ears prior to harvest. We did have high foliar disease pressure this year and reduced stalk quality. Compromised integrity of the kernel due to insect, disease, and mechanical damage can also impact test weight. I didn’t see the amount of kernel damage as I did in 2018. But there are certain hybrids that are high yielding and widely planted that I tend to see starburst patterns on kernels (due to Fusarium) and shortened husks exposing ear tips to more insect damage/ear molds. There are also hybrids that had a large amount of top dieback, husk tissue that turned brown early, or refuge in a bag plants that died early in fields. All of these may be factors potentially impacting test weight as well. Thinking about photosynthesis, we had reduced solar radiation during grain fill. I can’t help but think that could also impact it but didn’t easily find research that correlates solar radiation to test weight. There’s research correlating solar radiation to yield and kernel weight, though.

Regarding vomitoxin levels, the starburst patterns on kernels, insect damage leading to

Sprouting and kernel damage due to moisture and insects. 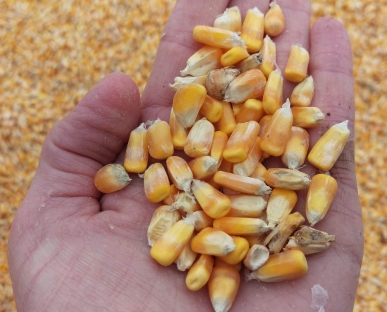 Damage to kernels due to Fusarium/Gibberella.

ear molds, wet corn not properly dried or cooled in bins can all impact greater Fusarium growth and the potential for vomitoxin to be produced. If vomitoxin (also called DON) is an issue, concentrations can triple in the ethanol process of producing the distiller’s grains. Hogs and poultry are more sensitive than cattle, so the end user may be a factor in addition to the vomitoxin levels. I don’t know the levels being rejected so I can’t speak more to this.

York County Corn Grower Tour: Corn growers and spouses are welcome to join us February 3 for a tour of ag industries in the Lincoln area. We will meet at the York Co. Extension Office at 7 a.m. and will carpool leaving at 7:15. Our first stop will be RealmFive which focuses on wireless connectivity for ag operations. We will then tour Smart Chicken in Waverly which offers retail- and foodservice-packaged organic chickens and antibiotic-free chickens from Kansas, Iowa and Nebraska. Lunch at Lazlos is next followed by learning about the UNL hops program and research using corn gluten meal and soybean meal. Possibly another stop on way home. Please RSVP to me at jrees2@unl.edu if you’re interested in attending by Feb. 2nd. Hope to have a good group who can join us! Flyer at jenreesources.com.