*The York and Seward County Extension offices are now open to the public. We ask that visitors please wear a mask when entering the buildings.*

This past week was interesting to say the least! For those who experienced hail and/or wind damage, the following site provides guidance via information and videos for early-season hail damage: https://go.unl.edu/u5ns. We do say to be patient and wait 4-7 days to determine recovery and warm temps can help. For home owners, there was also a great deal of tree and plant damage. Make clean pruning cuts and don’t treat/paint over cuts, don’t add fertilizer, and leave as much leaf area as possible.

Most of this week’s questions centered around soybeans. The past two weeks, the

majority of my soybean questions have been around emergence problems. Two common things I’m finding: many were planted around May 18-19 and they have a great deal of PPO-inhibitor injury to hypocotyls. In touching base regarding what we were seeing, John Mick with Pioneer shared that some soybean varieties are more sensitive to PPO-inhibitor injury. ‘Sensitive varieties’ means later on plants appear stunted and chlorotic in appearance. These plants also tend to have wavy leaves with some leaf cupping, which may have been mis-diagnosed as off-target growth regulator injury in the past. I’ve seen those symptoms for several years but just told people the plant was working to metabolize the pre-emergence herbicide and it was most likely taking longer due to the environmental conditions at the time. So, in a way, it was correct, but now we can all be more aware there are sensitive varieties to PPO-inhibitors. Thus, it’s important to talk with your seed dealer/agronomist about their variety ratings (if they exist). If planting a sensitive variety, it’s better to apply your pre-emergence application a week or so before planting to reduce the herbicide load on that germinating seedling. I’ve put a lot more explanation and pictures in this CropWatch article and the pics also on my blog.

The pre-emergence products did a great job for the most part. Thus, a common 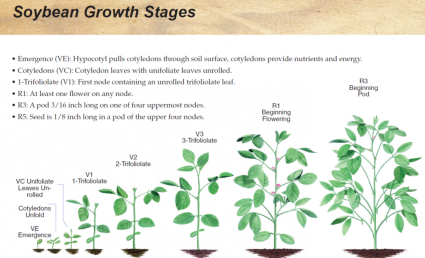 question/discussion this week was around spraying essentially ‘contact’ herbicides in the absence of weeds. Could appreciate those thoughts. Regardless if the farmer wanted to apply glyphosate, liberty, or dicamba, we did talk about the importance of spraying earlier than one thinks is necessary and the need for residual products. I was going to share more about that here, but Amit Jhala wrote a very good article in this week’s CropWatch at: https://go.unl.edu/y3r8. He explains which products are options to consider at this point depending on if you have emerged weeds or not, what growth stage they can be applied, and some label restrictions. There’s a picture on my blog for soybean development stages. The cotyledons are not counted. The unifoliolates are counted as V1 only when the trifoliolate leaf edges above them are no longer touching. This continues up the plant. New nodes with leaves will be produced every 3.75 days. Note that early planted soybean may flower soon; they don’t have to wait till June 21 (longest day of year) to do so.

Because of that, for those near the 45 day window for post-dicamba application to soybean, be sure to check fields as the label states 45 days after planting or R1 (at least 1 flower on any node), whichever occurs first. Follow label instructions and I’m also recommending documenting development stage via picture/video on all post- applications to crops this year. Regarding use of soybean dicamba, Nebraska Dept. of Ag Director Steve Wellman stated, “The Nebraska Department of Agriculture has not issued a stop sale order and will enforce the sales and applications of these products as they are currently registered in Nebraska.”

Thistle caterpillars are being observed in some early planted soybean fields. Threshold for pre-flowering is 30% defoliation.

Corn post-herbicide applications: Said I’d share on this, but ran out of room; I 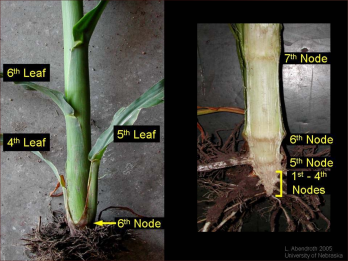 wrote a CropWatch article here: https://go.unl.edu/jz9v. Recommendations for any applications this year: Go into the field (beyond the endrows) and document growth stage of the plant via picture/video using the leaf collar method and/or split stalks (once reach V6 due to leaves sloughing off). Do this before any applications are made to the field. If the growth stage isn’t correct for the application, don’t spray. How I explain the split-stalk method of development staging: The growing point emerges above ground around V6. Dig a plant without breaking the stalk. Carefully split the stalk down the middle through the root ball. At the base of the stalk is an inverted triangle that contains Nodes 1-4 (but they can’t be differentiated). Next look for the white area above that (about ½-3/4”) followed by the next visible band. The white area is the internode with the band being the 5th node (V5). There’s about an inch of internode between V5 and V6. After that, internode length is more dependent upon air temperature instead of soil temperature. Every leaf is attached to a node. Pull off the fully collared leaves and follow them back to where they break off at a specific node. Count the nodes on the stalk to the highest collared leaf that breaks off at a node to determine the growth stage. 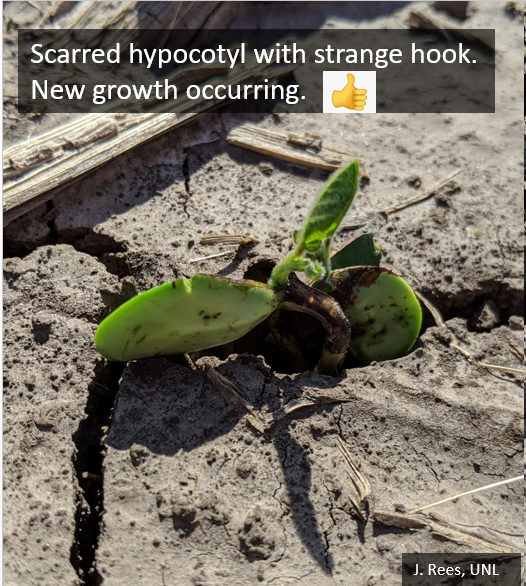 My concern with some of these plants is them becoming brittle and potentially breaking off at some point in the season.

There’s been mis-diagnosis/confusion about PPO-inhibitor injury vs. ILeVo ‘halo’ effect which shows the seed treatment is working. ILeVo causes no burning to the hypocotyls and the effect isn’t seen on leaves other than cotyledons.

Also been confusion between PPO-inhibitor injury and Phytophthora. Phytophthora will have discolored root and lesion from soil line upward. PPO-inhibitor won’t cause discoloration/rotting of the root. We have seen burning of stem near soil line due to rain/irrigation splash from PPO-inhibitor, so dig up seedling to check the roots for root rot.